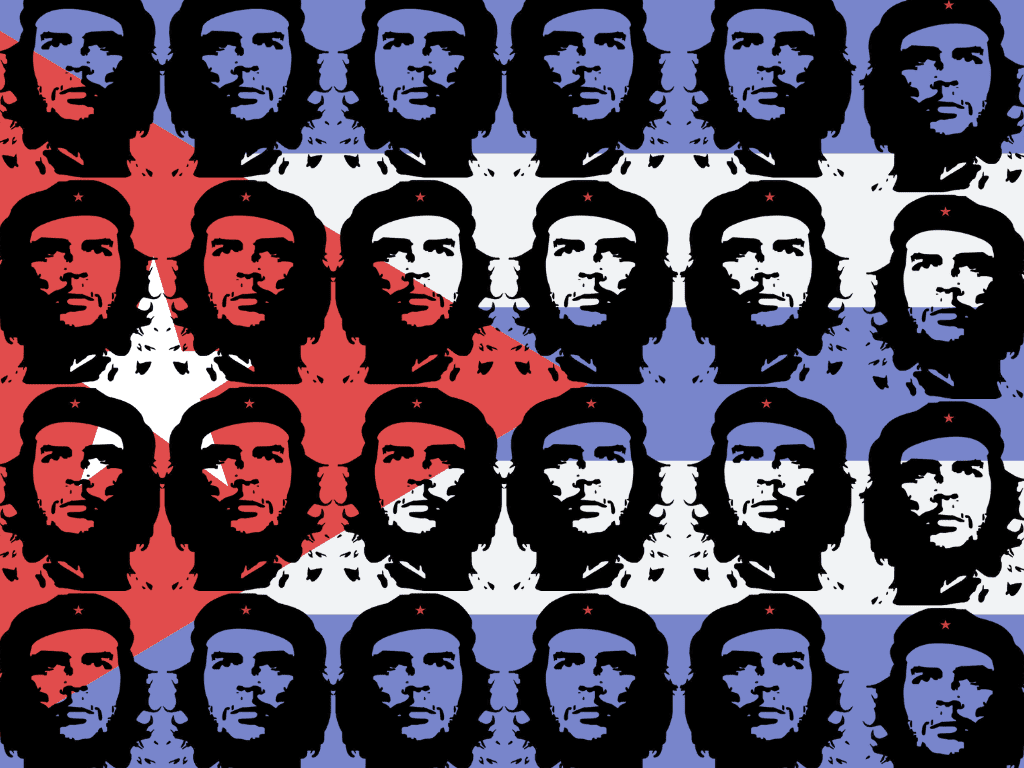 Cuba. One of a kind. Chapter III.

Back in time and slowing down

When thinking of Cuba, one can’t help recalling Che Guevara and his most famous image: a high-contrast black and white portrait placed on red background. This poster by Irish artist Jim Fitzpatrick became viral and is actually the most replicated portrait in history. Sometimes fame is mistakenly attributed to Andy Warhol leaving Alberto Korda, the prominent Cuban photographer, somehow lost in history. But it was him who took the picture of the 31-year-old Guerrilla Hero (Guerrillero Heroico) in 1960. Alberto Korda was a personal photographer and friend of Fidel Castro and that’s probably the reason why he appeared less formalist in his shots than in real life.

Cuban people carefully conserve the memory of Ernesto Lynch Guevara de la Serna (for sure, Che sounds easier), and the reminders of him are unobtrusive and quite stylish. Revolution Square (Plaza de la Revolución) in Havana truly confirms this, especially when visited at night. Very photogenic and Instagramable, and here again the image from Korda’s shot is used.

But the site of the first and last glory of Che Guevara is not located in Havana, but in the city of Santa Clara, practically in the center of the country. Here, in the crucial battle that secured the offensive of Fidel Castro to Havana, Сhe commanded a group of revolutionary forces M-26-7 in December 1958. The success of the rebels and the surrender of government forces in Santa Clara was the last blow to the regime of Fulgencio Batista who escaped from Cuba at 3 am on January 1st, 1959. 7 days later, on January 8th, 1959, the capital was welcoming the new leader, Fidel Castro.

The Mausoleum of Che Guevara is also located in Santa Clara, where he found rest accompanied by his 29 soldiers from the Bolivian operation. Still, it was only in 1998 when this happened after the discovery and exhumation of their remains in Bolivia. So, more than 20 years passed after they’d been killed in 1967 during a joint operation of the CIA and the Bolivian army. A remarkable fact is that among the 30 heroes was just one heroine, the mysterious and ardent idealist Tania, agent of the Cuban intelligence special unit. Tania was the pseudonym chosen by Tamara Bunke Bider, an Argentinean daughter of German communists who fled Nazi Germany in 1935. Tanya was just 29 years old when her life was interrupted by an ambush shot when wading the Bolivian Rio Grande.

It is not surprising that there were intense rumours about a supposed romantic relationship between Tamara Bunke and Che Guevara, which started in Czechoslovakia during their joint exercises in the early 60s, but, of course, there are no direct confirmations (neither refutations).

It cannot be disregarded, by the way, that among other things, Guevara was one of the pioneers of the trend to tailor constitution stipulations to his needs: in 1959, the post-revolutionary version of the Cuban main law was formulated in a way providing the Argentinean Che Guevara with a Cuban nationality equal to a birthright citizenship. Revolutionary fight against Batista’s regime for more than two years was the only legal requirement to integrate new citizens to Cuban society.

Actually, the delicate staff of the museum at the Mausoleum would gladly share these (and lots of other) facts with you. By the way, the place itself does not leave a gloomy and oppressive impression attributable to such sites. There are no embalmed bodies or indoctrinating slogans. It feels more like a temple. A temple of the everlasting memory of revolutionary idealism.

It’s easy to get to Santa Clara, so if you have followed our route and already been to Havana and the province of Cienfuegos, the route to Varadero could be planned with a slight deviation to the east (just for some 75 km). Be wise enough to fill a full tank in Cienfuegos — fortunately, fuel supplies from the local refinery are rarely interrupted.

After this journey, you’d probably be ready to dive into the classics of an all-inclusive package. Shortly after you reach your hotel in Varadero, the most difficult decision-making situations are likely to happen nowhere else but at the open bar. But, to be sincere, delicate alco-enthusiasts could face some disappointment: hotels mostly use quite mediocre rum brands for the unlimited bar and bartenders are not that acquainted with mixology trends. But there is always an alternative: cava. As long as main hotel chains belong to Spanish business groups (Meliá, Iberostar, Barcelo) everything is fine with supplies of Iberian products. And that’s a guaranty of sparkling start of the morning… To help you get over the shock content that local animators have prepared. Their program is impressive and followed by a loud disco at night.

Restaurants in all-inclusive hotels also leaves much to be desired, and for having a lobster for dinner you should make an appointment with this crustacean at the concierge service… If the lobster-list was closed right in front of you, don’t worry, there’s again an alternative: Barbacoa restaurant in the urban part of Varadero, at the corner of 64th Street and 1st Avenue (Calle 64 esq. 1ra. Avenida). Here you will find friendly staff, strong cocktails, lobsters with pineapples and a delicious chicken soup reminding of mom’s cooking.

If the monotony and gastronomic failures of a hotel reservation call for being diluted, you have a good chance to compare modern tourism with chill out options from the 20th century. And wander around the ruins of the single thermal resort in Cuba, whose glory of which was, unfortunately, short.

San Miguel de los Baños, a village where locals have completely lost the habit of seeing tourists over the past 60 years, is in an hour-drive from Varadero, surrounded by a picturesque hilly landscape. Nevertheless, from the 1870s until the Cuban revolution, Cuban high society gathered here: at the end of the 19th century, Spanish experts confirmed that the mineral waters from the springs in San Miguel de los Baños has curative effects, and in 1930 the first (and only) Grand Hotel opened here. Today, bats are the only guests of this graceful and monumental Renaissance-style building that requires a major overhaul. As for the thermal springs, there is evidence that they were polluted back in 1959 by one of the sugar factories. Nothing lasts forever, especially under the communists…

Our journey is also coming to its end all three parts fitted well in some unforgettable seven days. The route from Varadero to Havana, where you have to leave your rental car, runs through Matanzas, the center of Cuban oil production. Here, associated petroleum gas is mercilessly flared. So not be surprised that, despite the proximity of the sea, the intense smell of a gas station will haunt you for about 50 kilometers. And with the windows open it will also stay with you for some time. But not forever, in contrast to the unique memories of authentic Cuba.