The eminent Chilean politician, philosopher and film director Marco Enríquez-Ominami about Cuba, Latin America and his documentary “Latin America: Giant in Turmoil”, which premiered in St. Petersburg as part of the photo exhibition ¡Viva Cuba Viva? in the ARCHCLUB space (Sevcabel Port).

Oxana Katysheva: First of all, let me welcome you here in St. Petersburg at our photo exhibition ¡Viva Cuba Viva? dedicated to the 500th anniversary of Havana. What are your impressions of what you have seen? You are aware of the realities of modern Cuba and you certainly have your own image of Havana. Does the exposition reveal the character of the Cuban capital and its inhabitants?

Marco Enriquéz-Ominami: Yes, this exposition is a splendid illustration of the Havana’s urban, everyday, religious, cultural and family life. It’s wonderful. I know Havana well, and that city ravishes me a lot. I have been to Havana many times, both as a child and as an adult. And here we can see great photos from three talented photographers.

O.K.: How would you estimate the political transformations that Cuba is undergoing today? How does this matter for Latin America?

M. E.-O.: I think Cuba has been playing a crucial role in the political history of Latin America, influencing its democratic systems, progressive projects, its contradictions and problems. Latin America has always had an extremely intricated relationship with the United States, and it was Cuba, a small island just several hundred miles away from the coast of the United States, that has been at the forefront of this confrontation. All this makes Cuba special and meaningful. For the leftist powers of Latin America Cuba is the cradle of the revolutionary Marxist project, which has become an inspiration for many movements in many countries of the region.

O.K.: And what in general can you say about the situation in the region? The protracted crisis in Venezuela, the recent political crisis in Peru, the resignation of Morales in Bolivia, the protests in Colombia, Ecuador, Chile… Latin America, again and again, confirms the glory of the ‘boiling continent’. Why does this happen?

M. E.-O.: Latin America is a continent that has faced many challenges, having gained independence. This is the continent of the former colonies, but also the continent, where existing models of political and economic development have its own advantages and disadvantages. These shortcomings, in particular, can explain the current situation in Latin America.

Firstly, raw-material exports without added value still dominate on the continent: meat – in Argentina and Paraguay, copper –in Chile and Peru, oil – in Ecuador and Venezuela, gas – in Bolivia. In all cases, we are talking about the export-raw model of economies, which, in addition, are not complementary but competing for one to another.

Secondly, democratic institutionalization cost Latin America dearly. What happened in Brazil with Dilma Rousseff as well as in Ecuador, Bolivia, Chile, Venezuela – all these examples are institutional crises.

Thirdly, the role of the United States has become a serious destabilizing factor due to the active interventionist policies pursued by the US government.

As you have noted, Latin America is a “boiling continent.” A continent that is facing difficulties, but which has experienced a period of prosperity just under the progressives, and not under the conservative governments of the last two or three years. These three points explain everything. But it’s also worth mentioning the fourth, namely, that the poverty rate in Latin America has decreased very quickly. As a result, the share of the middle class has grown. And this middle class had hopes and aspirations that perhaps progressive governments failed to understand entirely.

O.K.: Let’s dwell on the situation in Chile. Preparation of a national referendum on the future Constitution of Chile has become an answer to the mass demonstrations at the end of the last year. The plebiscite is to be held in April. How would you estimate this process? What is your personal view on reforming the Chilean constitution?

M. E.-O.: The Chilean economy is poorly diversified and has a low wage level. Chile exports mainly three products: salmon, copper and wood. Given the high level of inequality, it explains why a significant part of the population is experiencing discontent and fatigue, which resulted in particularly severe, right down to violence, street protests. And the best way out, though far from ideal, but acceptable, has lied through the plebiscite, the first in the Chilean history. The referendum is planned for April when we will decide the future of the Constitution, our fundamental law. A significant, historic, incredible moment. But not without problems. Because the conservative president is opposed to a plebiscite, and society reasonably believes that changing the Constitution is not synonymous with prosperity.

O.K.: What significance do you attach to your work as part of the Puebla group, created last year with your direct participation? How would you describe the goals of this association?

M. E.-O.: The Puebla Group is an association of independent men and women who are ready for a constructive dialogue, representing themselves, not their political parties. The progressive union of the centre-left. We agreed to meet three times a year to discuss the problems of progressivism.

The first constituent meeting was held in the city of Puebla, Mexico. It was attended by 30 participants from 10 countries. We agreed mainly to continue work on reducing the influence of the judicial bodies on the development of progressive political projects. We also agreed to formulate concrete proposals to deepen regional integration.

The second meeting, which was held in Buenos Aires, Argentina, with the participation of Argentine President Alberto Fernandez, was already attended by 40 participants from 13 countries. We have taken a big step forward in developing a proposal for the convergence of the countries of Latin America, which consists in the work of numerous regional multilateral platforms: ALBA, UNASUR, MERCOSUR, PROSUR, the Lima group. The de Puebla Group promotes the idea that ‘together we will achieve more,’ and that Latin America should unite against the backdrop of the Sino-American trade war, in the face of such a difficult trade and political partner as Europe, in order to expand trade relations within the region, but first of all, for peace.

O.K.: It is worth noting that your documentary “Latin America: The Giant in Turmoil” was met with interest by the audience in St. Petersburg, but some aspects have lost their relevance since several political changes in the region. How would you comment on this? Do the unfolding developments speak in favour of certain heroes of your film? Do you have any plans or ideas related to Russia and Russian partners?

M. E.-O.: A lot of things have happened. The ex-president of Brazil, Lula, who received the term illegally, was released. This happened at the same time as we witnessed the coup d’etat and the overthrow of Evo Morales, democratically elected in accordance with the Bolivian Constitution. The progressives have returned to the Argentine government.

The documentary reflects my subjective search. I am an author and did not seek to be objective. It is my vision of the problems of Latin America and the reasons why it faces such difficulties. We would like the film to be watched by as many people as possible, including in Russia. Also, as a member of the Puebla Group, I understand the need to remove ideology from relations, make them more constructive, and thus contribute to the establishment of fraternal and partnership relations with other countries, including Russia and its leaders.

The audio version is available here. 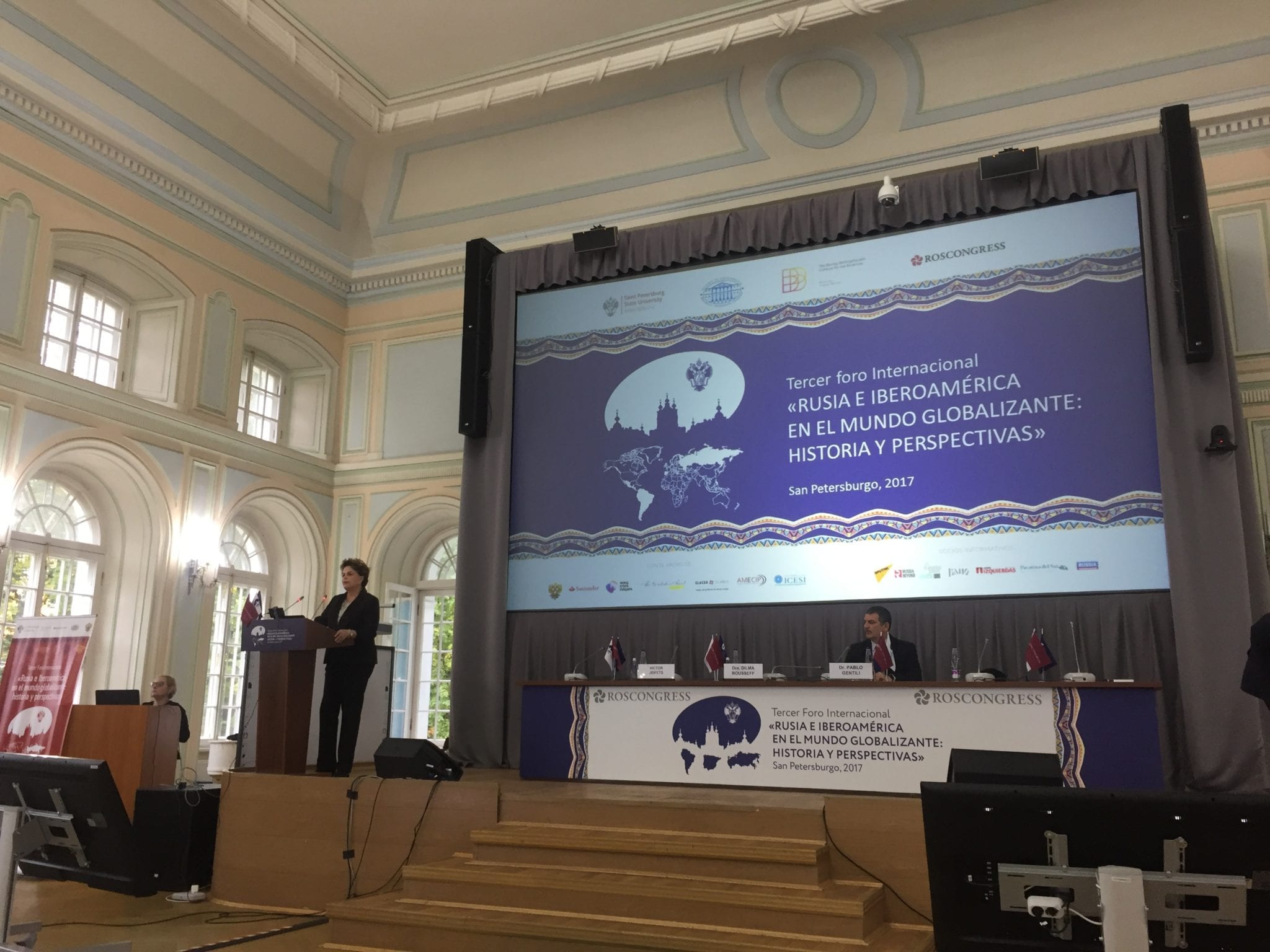 LACRUS on the III International Forum “Russia and Ibero-America”