The President of Bolivia, Evo Morales, called the decision of the International Court of Justice in The Hague (Netherlands) the recognition of the rights of Bolivia to a dispute with Chile on reaching the sea, the most significant event of 2015. Then Morales said that the age-old dispute should be accompanied by a dialogue between the authorities of the two countries. In addition, then the Bolivian leader noted that the International Court has made it clear to the world community that there is an unresolved issue that the Chilean leadership does not recognize. What did the Bolivians do since that time? How did the naval problem become the main symbol of the consolidation of the nation?

It is worth turning to the historical conflict between Chile and Bolivia, which since 1884 are in dispute over the withdrawal to the Pacific after Chile’s occupation of the Antofagasta region and along with it 400 kilometers of coastline as a result of the defeat of the Bolivian side in the war between the two countries of 1879-1883. Then Chile, with the support of Britain, invaded Bolivia to seize the nitrate deposit in the Peruvian and Bolivian parts of the Atacama Desert, which belonged to the Chilean nitrate company. In 2013, the Bolivian leadership filed a lawsuit against Chile at the International Court of Justice in The Hague, demanding that negotiations begin on the sovereign withdrawal of Bolivia to the sea, but the Chilean authorities maintain that the borders between the two countries were established in the Treaty of 1904 and do not see the need to review them. The decision of the International Court of Justice on the right of Bolivia to put forward its demands for access to the sea was “the most significant event of 2015”. The approval of the right of Bolivia to claim access to the sea in 2015 was the beginning of the launch of the large-scale national project “Mar Para Bolivia” (translated from the Spanish as “The Sea for Bolivia”), which affected all spheres of the country’s life.

Within the framework of this ideological program in the Plurinational State of Bolivia, an unprecedented event of a magnitude and social resonance took place on the 10th of March of this year. The largest flag in the world, of the length of 196.5 km, was stretched along the road connecting the high mountain city of Bolivia – El Alto and the carnival capital of Oruro. Why millions of Bolivians on Saturday at dawn went to an event called “Banderazo” (from the “bandera” – flag)? The mass action in support of the return of the status of a naval power united hundreds of thousands of people who deployed a blue cloth, called the “flag of maritime revenge”. Last Saturday the blue banner developed for hundreds of kilometers, Bolivians working in all state institutions and state corporations of the country went with hearts filled with pride, patriotism and hope. What The Hague Court decides we will find out very soon: meetings on this case will be held in The Hague within 9 days starting from the 19th of March. The Bolivian President Evo Morales has repeatedly noted in his statements and interviews that at the beginning of the XXI century Bolivia cannot continue to rely on decisions based on the use of force or intervention. The Bolivian side hopes that it will be able to regain the long-awaited access to the sea by peaceful means.

In addition, the International Court of Justice in The Hague opposed the Chile’s objections to the competence of this judicial body in the dispute with Bolivia over the access to the sea. The members of The Hague Court noted that the institute has jurisdiction under article 31 of the Bogota Covenant and has the authority to grant the request of the claim of the Plurinational State of Bolivia of the 24th of April of 2013. As a result, it was decided to reject the counterclaim of Chile. Now the territorial dispute between Bolivia and Chile is in the competence of The Hague Court. The Bolivian leader repeatedly complained that his country suffers from the Chile’s “constant economic aggression” because of its lack of access to the sea. On the 8th of June of 2017, within the framework of the forum “European Development Days”, which was held in Brussels, Evo Morales openly declared: “I feel that this is a permanent economic aggression of the state of Chile against the Plurinational State of Bolivia”. The President referred to the shortcomings and financial damage brought to La Paz from Santiago, as, according to him, the Chilean side violates the treaty on bilateral free transit from 1904, signed following the Second Pacific War.

In his speeches, Morales also hinted at a strike by Chilean customs officers at border posts, especially Bolivia. He argued that, since 2015, there are more than 30 days of border closures from Chile, and Chilean strikes caused the Bolivia’s damage to “more than $ 200 million”. “The Chilean government never supports us in the fight against smuggling, but smuggling as a bleeding for the Bolivian economy”, Morales added. During his speech at the forum “European Development Days” in Brussels, Evo Morales also condemned the shortcomings of the “forced closure” of the country by Chile, which significantly affects economic development. Nevertheless, Morales stressed that in the last 3 years of Bolivia is the leader in the rate of economic growth in the South American region, despite this problem. The Bolivian newspaper “La Razón” reports that Bolivian economists and analysts estimated that with access to the Pacific, Bolivia’s economy could increase its annual growth by at least 2%. By the way, it should be noted that the Plurinational State of Bolivia still has not only a museum of the coast, but also its own full-fledged navy, which is based on the lake Titicaca. Every year on the 23rd of March, the “Day of the sea” is celebrated on a grand scale in the country, which is a grandiose celebration and an official weekend. On this day, with the support of the Ministries of Culture and Defense, commemorative events are held with the participation of the top officials of the state, reminding themselves and the world community of their loss. For more than 100 years since the signing of the peace treaty with Chile, the defeat in the war has become a kind of cult, and the sea is a real national dream for every Bolivian.

Even if Bolivia still wins the trial, this decision, unfortunately, will not put a final stop in the longstanding confrontation and the age-old apple of discord between Bolivia and Chile. If The Hague Court makes an unprecedented decision to force the Chilean leadership to negotiate, this is unlikely to mean that Chile will have the responsibility to conduct these negotiations until the Bolivian claims are satisfied. In general, the International Court of Justice cannot influence the “unraveling” of a clash of contradictions within the triangle of Bolivia-Chile-Peru, because the Chilean side will never agree to divide its territory into two parts by the so-called Bolivian “corridor”, and the territory on the border with Peru it will not be able to hand Bolivians without the formal consent of Lima, which is unlikely to give Bolivia its territory. Thus, to date, the prospects for obtaining Bolivia’s long-awaited access to the sea entirely still depend on the development of the Chilean-Bolivian relations, since no one can force Chile to part with the territories conquered in the late 19th century against its will. In this situation, Morales’s bid for The Hague court, and not for establishing relations with the Chilean government, can ultimately “put an end to” the Bolivian “dream of the sea”. 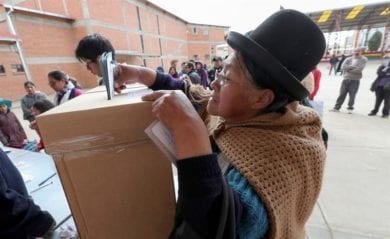 A “bitter choice” of Bolivia? 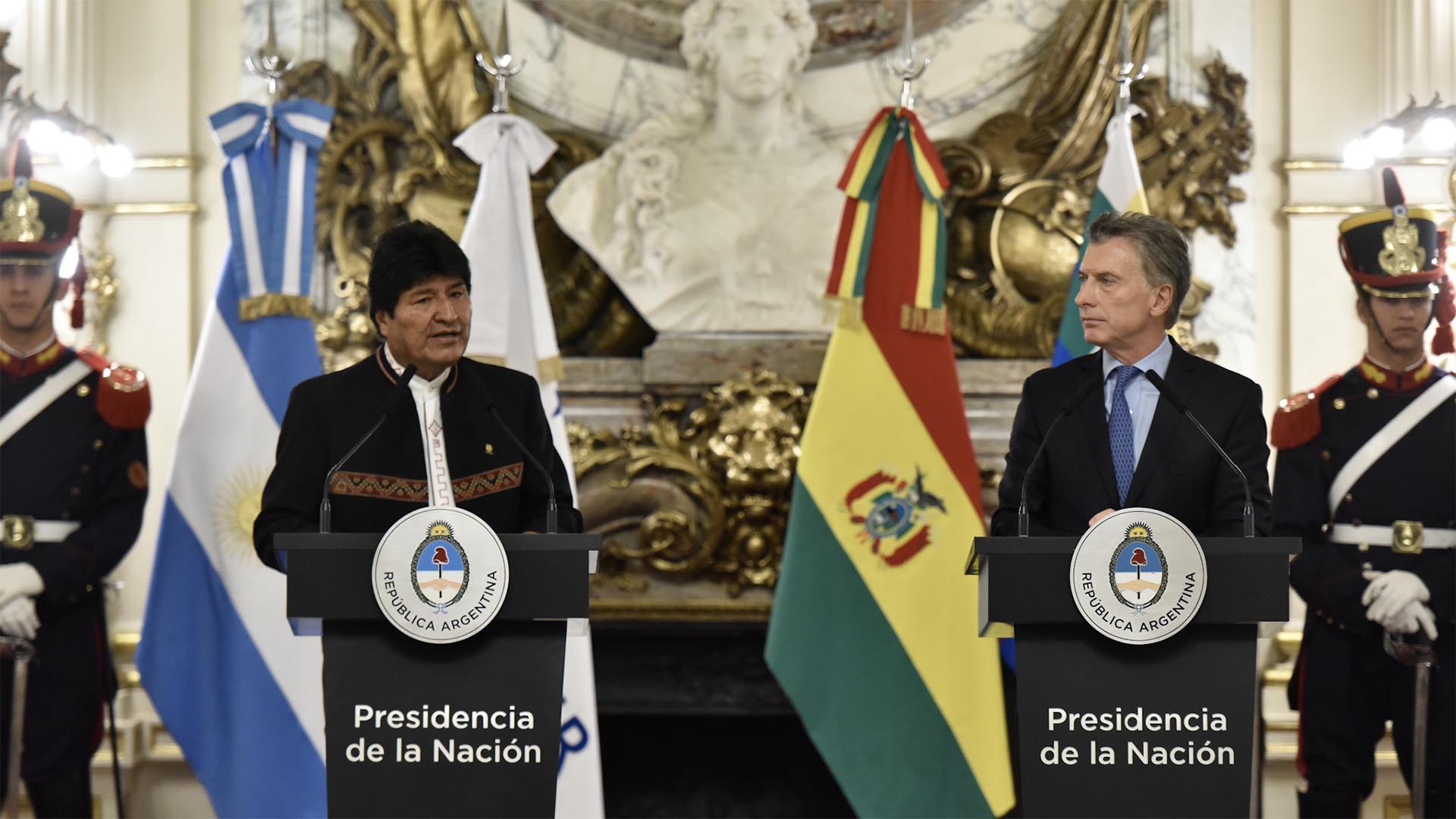 The meeting of Morales and Macri: complementarity against controversy